People either love or hate Durian fruit. (Opinions tend to vary depending on whether they have actually tasted it, getting the fruit past their nose and into their mouth.)

A lot of people absolutely hate that smell.  (“Turpentine with onions” and sometimes a mention of “a gym sock” are commonly used to describe it.) Hotels often have signs stating that Durian must not be brought into the hotel – because of the almost indescribable, invasive, lingering odour. In some countries the locals have been led to believe that foreigners / westerners are unable to eat Durian, they’ve been told that it’s just not possible! 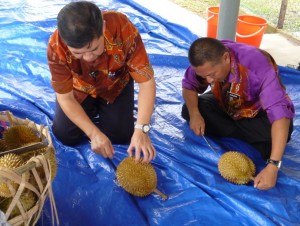 It’s not just the aroma that seems a tad unfriendly. Handling and opening the fruit can be very tricky. The spikes on the outside are hard and sharp, and the skin is thick and woody. 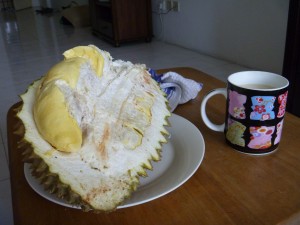 An opened Durian on our coffee table

I had a small taste of Durian once in China, but it was not particularly impressive. When they announced the pre-Ramadam “Fruit Festival” we had a chance to get familiar with the taste of Durian as well as Mangosteen which is often eaten with it.

There were all sorts of rules and warnings about eating Durian. Like: Don’t drink fizzy drinks with it – bloating will follow. Eating Durian can cause a feeling of “heatiness”, and eating Mangosteen with it has a cooling effect. Then there are warnings about the carbohydrate content and the calorific effect. I ate it anyway. 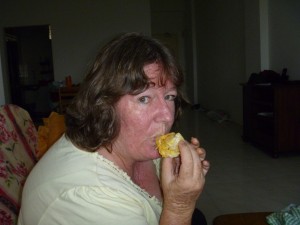 So what does it taste like? The nearest thing I can think of is the sweetest gooiest custard possible! So we ate quite a bit of it. And then on the way home we saw someone selling them by the road, and we stopped and bought some more (even though it meant the car and the apartment were a bit stinky for a while).

That night my blood sugar was fine – no spike despite the warnings. And I slept better than I had in ages. No bloating, no heatiness, just happiness!

On the Internet we found all sorts of interesting information about Durian fruit. Durian increases levels of serotonin in the brain. Happy fruit!

Now they don’t stink any more as far as I’m concerned. Just the tiniest whiff brings up happy thoughts and memories!