A face on the train 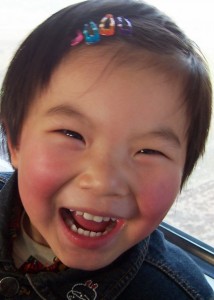 The little girl was so excited to be travelling with her doting parents on the train to the ancient Chinese city of Xi’an. There was so much to see and experience and she was bouncing around trying to take it all in. The people in the seat in front of her family were different from anyone she had ever seen before. Their hair was not straight and black, their skin was pale and freckled, and their eyes were round. But most of all, they weren’t inscrutable. Many people in this overcrowded country responded to the overwhelming crush of humanity by withdrawing, masking their emotions, and staring stony-faced.

She climbed up on her seat between her parents and played ‘peek-a-boo’ with the people in front. They shared fun and feelings with her in the absence of shared language. Desperate to interact with these different people, she persuaded her parents to let her share a gift of a hard-boiled egg, and was delighted when they accepted.

In a country where young people struggle to develop an individual style and stick out from the crowd as they search for jobs and future, this young girl will need only her eager smile and contagious friendliness.