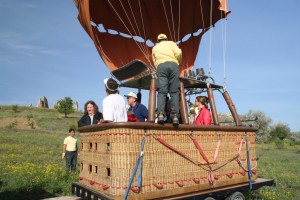 I am the first to admit that I have always been a bit on the timid side. As a kid I was painfully shy. But that doesn’t mean that I don’t enjoy an adrenaline rush when surviving a dangerous situation. So maybe for me that happens more often than for a bold person.

When Peter suggested that we go up in a hot air balloon I was scared. I don’t like heights much – at least in an airplane you can pretend you are not really up high at all. It was very expensive, which seemed like a good excuse. But Peter argued that this was one of those things we would probably only do once in our lives, and so not only did the expense not really matter, but we should go for the very best, most expensive option. So, it cost a fair bit, but it was going to be worth it.

We had to be ready at 4 am, and it was dark, and cold. I was afraid that I was not wearing warm enough clothes and that I would be cold and miserable, especially once we got ‘up there’. There were lots of operators accepting money and loading people into mini-buses to go to their various launch sites. Our particular group had two balloons, and they launched a fair away apart from many of the others.

How do you get into a balloon basket? Do you realise how big those things are? And don’t you get burnt while they are inflating the thing with hot air? So many questions, and so many things to be scared of!

Once we were up in the air, I found that I wasn’t cold at all. The operators had explained to us that we wouldn’t feel the wind because “we are the wind”. Whenever the wind blew, we simply moved with it. And as the burner was turned on periodically to choose a different level and wind direction, the warmth kept everyone inside the basket toasty warm.

With the two balloons accompanying one another we headed off up and down the valleys around Kapadokya between the many strange-looking ‘fairy chimneys’. The two balloons moved around and around one another, providing many great photo opportunities. The silence was immense as we floated over the countryside in the early morning, only the occasional roar of the burner interrupted our hushed conversation. At one time we came very low, just above the bushes, and a fox creeping around did not even seem to notice us.

In the distance we could see the other balloons, many of them much larger than ours – and with larger baskets full of people. They all seemed to cluster in the one area as they went high into the air, waited a while, and then came back down to earth.

About the time the others were all coming back down, we soared high into the air. I think they said it was 7000 feet. We could see the whole beautiful countryside for miles and miles around. Then we began to descend, and searched for the support crew on the ground. As we got lower we could see them in a couple of trucks, driving up and down the country roads following the balloons and looking for a suitable field to land in.

As we got closer, local children started trailing along hoping to join in the celebration that they knew would be part of the landing. When the balloons were only a metre or two off the ground, the crews grabbed the ropes and pulled them directly onto the back of the truck.

Then the crew helped the eager children to pick wildflowers and decorate the two baskets. Tables were set up and there were cakes and glasses of champagne and juice as everyone celebrated another safe trip. Although they go out almost every day, every trip is celebrated, and shared with the locals. Of course then there was also a table with merchandise such as T-shirts and sweat-shirts all with company advertising.